Home » Graduate Spotlight » Raw Food or Cooked Food, Which is the Healthiest? Put Down that Kale Smoothie! 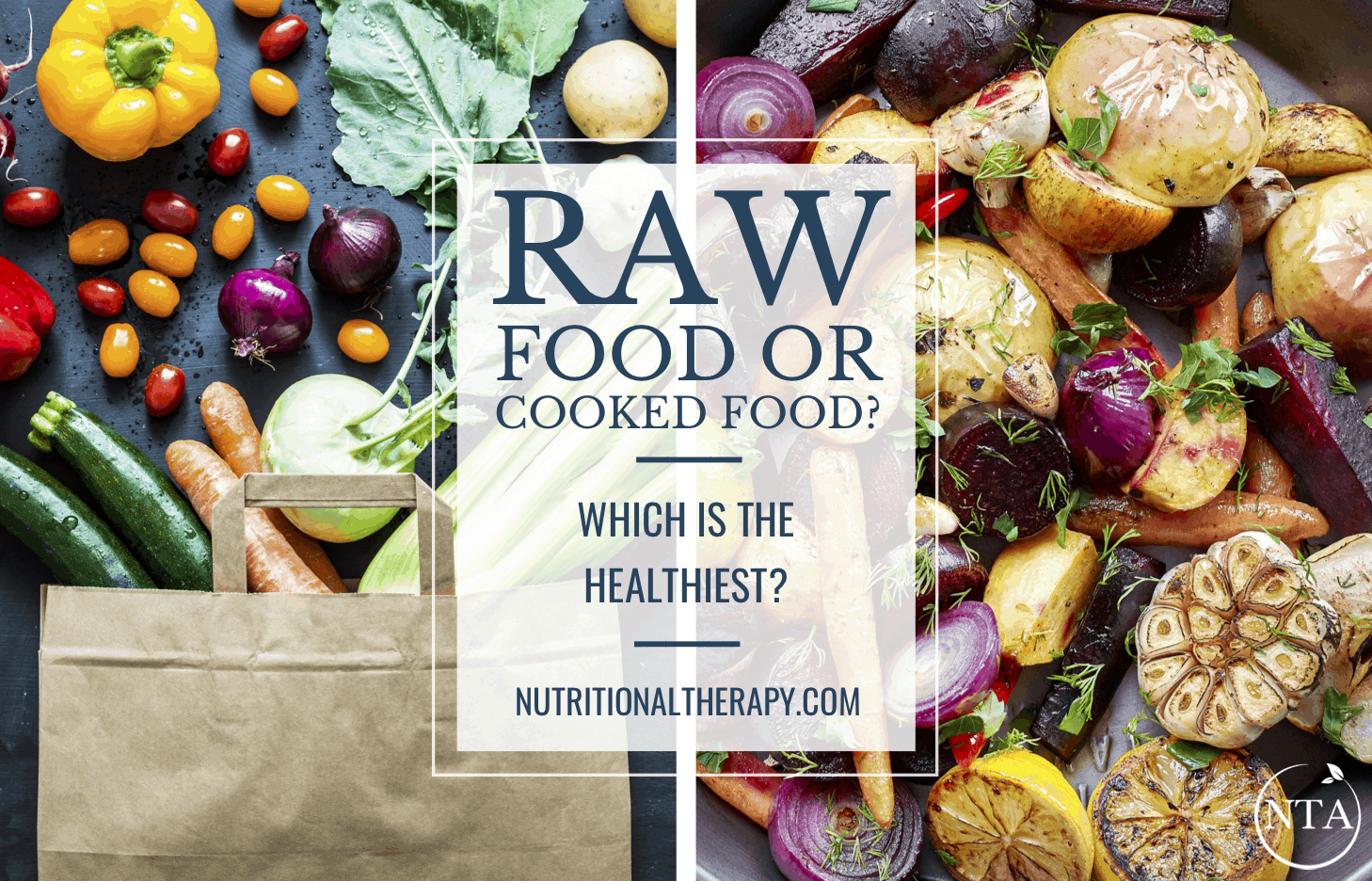 Guest post by Diana Rodgers, RD, LDN, NTP. This article originally appeared in the Winter 2012 edition of The Nutritional Therapist.

I hear and read about many people making kale smoothies, consuming raw nuts, and munching salads consisting of raw broccoli. So, I decided to take a look at some research to see what the nutritional costs were of eating raw food.  I found that it may better for your body to consume primarily cooked or lacto-fermented vegetables. Breaking down the cellular structure of vegetables through these methods greatly increases the digestibility and nutrient absorption in vegetables.

May Lead to Thyroid Issues

Certain foods can cause disrupted thyroid hormone production. Foods belonging to the cruciferous family are called “crucifers,” and include broccoli, kale, cauliflower, Brussels sprouts, cabbage, mustard, kohlrabi, and turnips. These foods may reduce thyroid function by blocking thyroid peroxidase, and by disrupting messages that are sent across the membranes of thyroid cells. Cooking these vegetables greatly reduces these negative effects.

May Cause Hormonal Regulation Issues

Cooking may also have a positive effect on net energy in the body. Humans on vegetarian diets exhibit higher reproductive performance when eating cooked food than raw food. Evidence of low energy intake in women eating predominantly raw food is supported by their having higher rates of amenorrhea or menstrual irregularities than those eating cooked food.

In one study, it was found that menstruation was absent in 23% of females of childbearing age who ate at least 70% of their food raw and in 50% of women reporting a 100% raw diet. Although these women were primarily vegetarian, the addition of raw meat to the diet did not change the odds of ovarian suppression. The researchers concluded that women suffered because of their relatively low net energy gain as a consequence of eating their food raw.  A nutritional analysis suggested that in traditional communities, a diet of raw wild foods would render survival and reproduction difficult.  Learn more about the energy loss through consumption of raw food here.

May Cause Food-Borne Illness

Constant exposure to pathogens and bacteria through raw food can overcrowd the gut flora and cause food-borne illness, food poisoning, or dysbiosis. Consuming conventionally farmed raw food can increase the likelihood of being exposed to harmful bacteria like Salmonella enteritidis and Listeria monocytogenes.

May Cause Digestive Upset

Foods high in insoluble fibers like kale, cauliflower, broccoli, etc. can cause some digestive troubles as they are not absorbed by the body. Instead they call on water from your digestive system and can cause inflammation to an already inflamed gut. Research shows that masticating or cooking veggies and fruit can improve overall digestibility and energy value.

Given that textural changes are at least partially responsible for the proposed positive effects of cooking on intake, digestibility, and the cost of digestion, non-thermal processing methods that manipulate texture, such as pounding, may likewise be effective in improving the net energy value of meat.

It is important to note that eating cooked, very lean meats has a nutritional cost. Archaeological evidence suggests that fat derived from bone marrow may have been preferred over muscle tissue as a source of energy and nutrients among early humans. Diets deriving more than 50% of calories from lean protein can lead to negative energy balance, so-called ‘‘rabbit starvation,’’ due to the high metabolic costs of protein digestion.

Foods have been heat-treated for many centuries, since our ancestors learned, by trial and error, to master fire for cooking purposes approximately 700,000 years ago, to modify the taste and preserve nutritional properties of foods. The invention and continuous development of food treatment has had a substantial, if not major impact on the intellectual, societal, and economic development of mankind.

The health benefits of fermentation have been known for centuries. In 76 A.D., the Roman historian Plinio advocated the use of fermented milks for treating gastrointestinal infections. Fermentation is a non-thermal process that produces chemical changes by enzymes produced from bacteria, microorganisms, or yeasts and is one of the oldest-known food preservation techniques.

During fermentation, the carbohydrate energy source in food, such as lactose in milk, is converted to lactic acid. The same happens when pickles are produced from cucumbers. Yeasts convert glucose to ethanol and carbon dioxide. Many health-producing secondary metabolites are produced through fermentation, especially B vitamins and bioactive peptides which can be antimicrobial and immune-stimulatory.

In the early 1900s it was realized that bifidobacteria may be effective in preventing infection in infants and the consumption of fermented milks were seen to reverse putrefactive effects of the gut micro flora, leading to the development of the probiotic concept. Probiotics are now used in the treatment of infections and used to promote a healthy immune system. Consuming fermented foods will improve the presence of healthy bacteria in the gut.

One of the most important beneficial effects of food processing is that it destroys unwanted compounds and microorganisms. Pathogenic bacteria are killed when exposed to heat. Cooking also deactivates anti-nutritional factors such as protease inhibitors and other natural toxins.

When considering meat, there seems to be some evidence that processing meat either by pounding, drying, curing or cooking is beneficial. Pounding meat and making it soft seems to reduce the expense on digestion, partly because it passes more quickly through the gut.

The collagen surrounding each fascicle of muscle fibers generally remains too tough for mastication until heated to 60–70° C, when collagen begins to be hydrolyzed into gelatin, a soluble protein. Although the muscle fibers themselves remain tough, meat cooked beyond this temperature leads to gelatinization of the collagen, which separates the muscle fibers and the gelatin.

Improved texture of meat makes it easier to chew, and easier for our bodies to break down. Also, when the fats are heated to oil from a fat, it’s easier for our bile to emulsify and ultimately leads to faster absorption. In studies, humans and chimps prefer the taste of cooked meat, leading to us eating more of it. Consumption of more protein meant larger brains and bigger muscles as we evolved.

Including strains associated with raw meat products such as Escherichia coli, Salmonella, Campylobacter, Staphylococcus, and Listeria. The potential energy savings due to reduced immune maintenance and up-regulation could be sizable. Raw wild meat is possibly less pathogen-bearing on average than raw meat that has been raised and processed for mass-market consumption.

When meat is processed at the slaughterhouse, E. coli and other pathogens from the intestines can invade the ground meat. This is why most outbreaks involve burgers and other forms of ground meat but is not usually associated with steaks. These pathogens do not enter the inside of the muscle tissue (steaks).

When eating industrially-raised red meat, I suggest cooking the burgers well. Slow cooking meat appears to be one of the best methods to prepare meat for optimal digestibility.

Lightly cooked fish is healthier than raw or fried.

In the case of fish, it appears that lightly cooked is optimal. In one study where edible portions of fresh fish were used raw, fried, cooked and undercooked, the researchers concluded that the breakdown of fish proteins were all fairly complete, but general digestibility was greatest with underdone fish as compared to raw, fully cooked or fried fish.

I strongly suggest cooking vegetables, consuming lacto-fermented vegetables, and other fermented foods. If you like to eat raw meat, make sure it is from a very clean source and it’s safer to stick to muscle and organs which are less likely to be contaminated with pathogens.

If you are out at a restaurant and want a standard industrially-raised beef burger, order it cooked well. Focus on slow cooking processes and using primarily grass-fed and wild meats, where the animals are much less likely to be sick (and get you sick). These meats will also have a much better ratio of omega-3 to omega-6 fats, thereby keeping inflammation down. Sashimi and other raw fish from trusted sources are ok, but lightly cooked fish seems to be optimal as far as protein digestion.

The views and opinions expressed in this post are those of the author and do not necessarily reflect the views and opinions of the NTA. They are intended for general information purposes, and are not to be considered a substitute for medical advice, diagnosis, or treatment.

Want your recipe or article to be featured on our blog? Email our team Marketing@nutritionaltherapy.comwith your full name, article, a short bio in third person, and a headshot. We may feature you in an upcoming blog post. 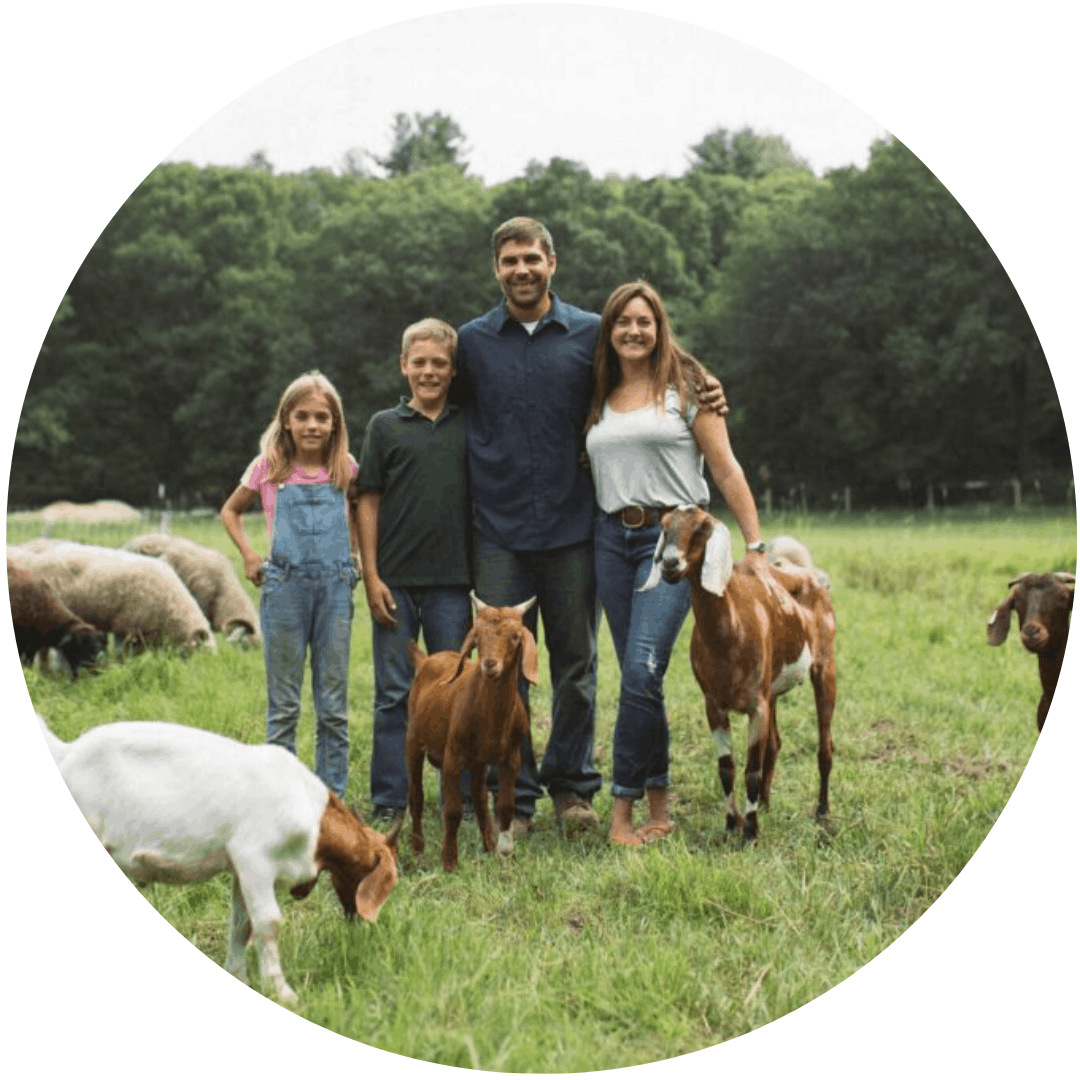 Diana Rodgers, RD, LDN, NTP is a “real food” nutritionist living on a working organic farm near Boston, Massachusetts that runs a vegetable and meat CSA. She is the author of two bestselling cookbooks and runs a clinical nutrition practice. Diana writes and speaks about the intersection of optimal human nutrition, environmental sustainability, animal welfare and social justice. She is also the producer of The Sustainable Dish Podcast, interviewing experts in the environmental and health movement. Her new film project examines the environmental, nutritional and ethical case for “better meat’. She can be found at www.sustainabledish.com.

Join us for a Live Info Session on June 26 at 5 PM PST. One of our Senior Lead Instructors will go in-depth, discussing the differences between our programs. This is a great opportunity for you to get your questions answered!

Register for the next live info session