Home » Nutrition Articles » What is the Healthiest Cooking Oil? A Comprehensive List of Safe and Unsafe Oils for Cooking 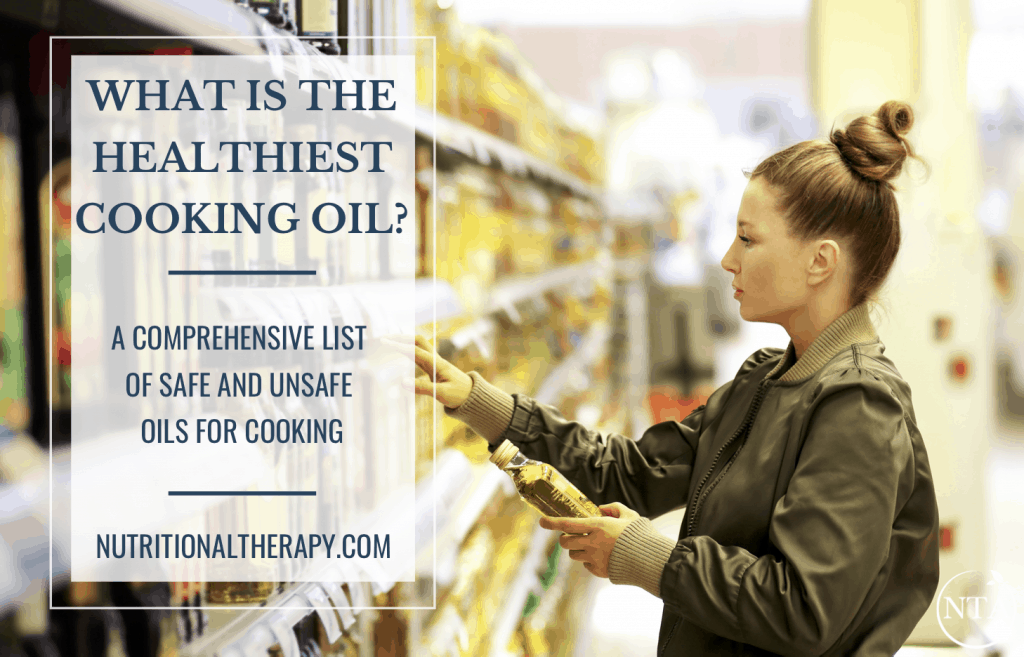 So, which is the healthiest cooking oil or fat? Below is a guide to help you determine which fats and oils are safest to include in your favorite recipes and which are unsafe to consume at all. When choosing an oil or fat it is important to consider bio-individual needs, variety, and of course, consult your physician. Consuming an excess amount of any one fat can have negative effect on the body. Below, fats and oils are categorized by Safest, Safe, Unsafe for Cooking, and Unsafe for Consuming. Notice the commonality of all these fats – they all have high percentages of saturated fat, the highly stable fatty acid that allows the fat to remain stable when heated.

This healthful tropical oil is almost fully saturated (92%). It has powerful antimicrobial and anti-fungal properties and contains a medium-chain fatty acid called lauric acid, which, incidentally, is found in abundant quantities in breast milk (Peedikayil et al., 2016). Coconut oil can be combined with ghee or lard to hide the taste of coconut in recipes. Coconut oil is safe for cooking and frying at higher temperatures.

Lard is the fat from pigs (pork fat). It is safe for cooking and frying due to its nearly equal fatty acid profile of 40% saturated and 48% monounsaturated fats. Lard has approximately 12% PUFAs (poly-unsaturated fatty acids) but will vary depending on the animal’s diet. Lard is a healthful source of vitamin D if the pigs from which it is rendered have been allowed to live outside in the sun and pasture on grass (Larson-Meyer et al., 2017).

Ghee is a stable, saturated butterfat with the milk solids (casein proteins) removed. It is safe for cooking and light frying (Sharma, Zhang, and Dwivedi, 2010). If you are intolerant to butter, try ghee. Ghee is prepared by heating unsalted butter at a medium temperature until the water content of the butter has evaporated. This allows the casein to separate and sink away from the butterfat. Next, the butterfat is carefully removed, leaving the milk proteins behind. The butterfat is then allowed to cool and solidify to be packaged as ghee.

Be sure the ghee you purchase is made from organic, grass-fed butter. There are several brands of ghee available at health markets, but if you wish to prepare your own homemade ghee, watch this helpful instructional video.

Very safe for cooking and frying. Tallow fats are 50-55% saturated, 40% monounsaturated and only 3% or less polyunsaturated. Tallow may be purchased from US Wellness Meats. Interesting fact: McDonald’s used to fry their French fries in 93% beef tallow (along with 7% cottonseed oil) before changing over to vegetable oils with added chemical flavor enhancers in 1990 (Schlosser, 2001).

This deep orange-red tropical oil has a pungent, paprika-like flavor that is best suited for roasting root vegetables, and is high in plant nutrients such as tocopherols, carotenoids, tocotrienols, and coenzyme Q10 (Loganathan, Subramaniam, Radhakrishnan, Choo, and Teng, 2017). Try roasting red and white potatoes, red, yellow, and orange bell peppers, fresh garlic and herbs in red palm oil. Butternut squash and parsnips are also delicious when roasted in red palm oil. It is a nice change from the usual oils used for cooking and brings color to your plate.

Quick stir-frying, light sautéing, and slow/low simmering are appropriate forms of heat for these oils. Again, notice the commonality of these fats. All except sesame oil contain a majority of monounsaturated fatty acids.

These oils should ALWAYS be extracted via expeller-pressing! Read the label first!

Olive oil contains 75% MUFAs. It is relatively stable for cooking. There has been a rumor moving its way through the holistic community for the past several years stating that trans fats are formed when olive oil is exposed to higher temperatures. Fat expert Mary Enig did a beautiful job of explaining that this rumor is not only untrue, but completely lacking in supportive scientific evidence. Lightly cooking with olive oil over a medium heat (less than 400 degrees) is considered safe.

Can olive oil and its MUFA molecules be damaged at high heats resulting in free radical production? Yes, but these unstable molecules are different from trans fats, so please do not confuse the two. Again, to form a true trans fat, the fat must be exposed to extreme pressure and temperatures, metal catalysts, chemical solvents, etc, in order to alter the chemical structure of a fatty acid molecule from its natural “cis” formation to a “trans” formation.

Peanut oil is relatively stable due to its MUFA content. Use it occasionally for a quick stir-fry, but the key word here is “occasionally”. Peanut oil also has a significant PUFA content, so limited use is recommended.

A relatively new edible oil to the market introduced in 1999, avocado oil has been previously used for many years as a moisturizing agent in cosmetic and hygiene products. Avocado oil is not extracted from the pit, rather, it is extracted from the fatty pulp, which is high in MUFA’s. It is similar to olive oil, so the same cooking rules apply.

Macadamia nut oil contains nearly 80% MUFA’s. It is very close to the fatty acid profile of olive oil, so the same cooking rules apply. Macadamia Nut oil has a distinctive, nutty flavor and is delicious in salad dressings. Look for expeller-pressed, organic, and unblended versions of this oil. It stores well in the refrigerator for up to one year.

Like peanut oil, sesame oil is relatively stable. Sesame oil falls right between a MUFA and a PUFA (approximately 42% MUFA, 43% PUFA), but it has high levels of antioxidants for protection against oxidation, so it may be used for low-heat stir-frying or a quick sauté. Combining sesame oil with olive oil and/or other stable saturated animal fats will help protect sesame oil when cooking.

Unsafe for any kind of Heat Exposure! DO NOT use for Cooking!

*These oils are primarily composed of PUFAs, so should not be heated. If you do wish to consume these oils, do so in small doses. You can find these oils in dark, glass or thick plastic containers in a refrigerated section of most health food stores. PUFA dominant oils should never be refined or processed, and unfortunately, finding truly unprocessed versions of these oils can be a difficult task. Corn and soybean oils are best avoided due to their genetically modified status and heavy pesticide levels.

Use omega-3 rich oils like flax oil sparingly in salad dressings (add flax in small amounts to a base of olive oil), in small servings in a condiment such as homemade mayonnaise, stir them in small amounts into freshly prepared smoothies, lightly drizzle them over cold soups, dips, and hors d’oeuvres, or consume them right off the spoon in very limited quantities as a dietary supplement.

These primarily omega-6 fatty acids, whether as a liquid or contained in a soft-gel supplement, are widely available in health markets. They are nutritionally supportive oils, but should not be used for cooking. They are highly reactive and should never be heated. If you do wish to supplement with these oils, consume them in very small amounts as you would any other omega-6-dominant PUFA.

Unsafe to Consume Under any Circumstances

Canola is the current oil of choice for prepared foods at most grocery stores across the country, including Whole Foods Markets. One of the most controversial oils in the nutrition world, canola oil is primarily a monounsaturated fat, but also contains about 30% polyunsaturated fatty acids. Extracted from the hybridized and commonly genetically modified rapeseed plant, canola is a highly processed oil. The delicate PUFAs in canola turn rancid quickly during processing. Given the fact that canola oil must move through damaging extraction processes to be harvested and deodorized, we believe that canola oil is unfit for consumption. It is an oil of industry and does not belong in the human digestive tract. Other experts, however, disagree, and canola oil is commonly claimed to be a ‘heart healthy’ fat safe for cooking. We urge you, the reader, to do your own research and come to a conclusion.

Articles we recommend are:
Canola Oil Fact Sheet
How Industrial Seed Oils Are Making Us Sick

Cotton, along with soy and corn, is one of the most genetically modified, pesticide-laden crops in America. Besides the danger of ingesting these pesticides, when did cotton and its seed become food? The extraction and hydrogenation processes used to process these seed oils quarantine pesticides in the oil, and therefore the high pesticide levels found in cotton, soybean, and corn oils are reason enough to categorize them as inedible. Cottonseed oil is one of the main ingredients in Crisco shortening, along with hydrogenated soybean oil.

Finally, we want to reserve a special place for the queen of cooking fats, real butter.

Butter is re-gaining a positive place in nutrition lexicon, and our ancestors prized butter for its life-giving nutrients! Raw, unprocessed butterfat from grass-fed cows has a comprehensive fatty acid profile that protects its consumer from developing imbalances such as hardening of the arteries, calcification of organs, glands and joints (arthritis), and cataracts.

Also, butterfat enhances brain function and increases cell membrane integrity. With all these health benefits, raw organic butter can be a dietary fat consumed each and every day.

Choose your fats wisely to ensure they have been minimally and safely processed, or better yet, not processed at all. Remember, healthy fats are an important macronutrient component of our diet!

Consume a wide variety of fats from whole oils to whole foods containing healthy fats and carefully monitor and limit your consumption of PUFAs. If you want to learn more about fats and the important role they play in balanced health, read these two eye-opening articles titled, The Skinny on Fat and The Oiling of America. These articles are a must-read for anyone wishing to regain their health and vitality. Much of the information stated in this article here is from the work of Dr. Mary Enig, PhD and Sally Fallon, coauthors of the aforementioned articles.

If you would like to learn more about healthy fats and the NTA’s holistic nutrition paradigm, take our 7-day free course Nutritional Therapy 101 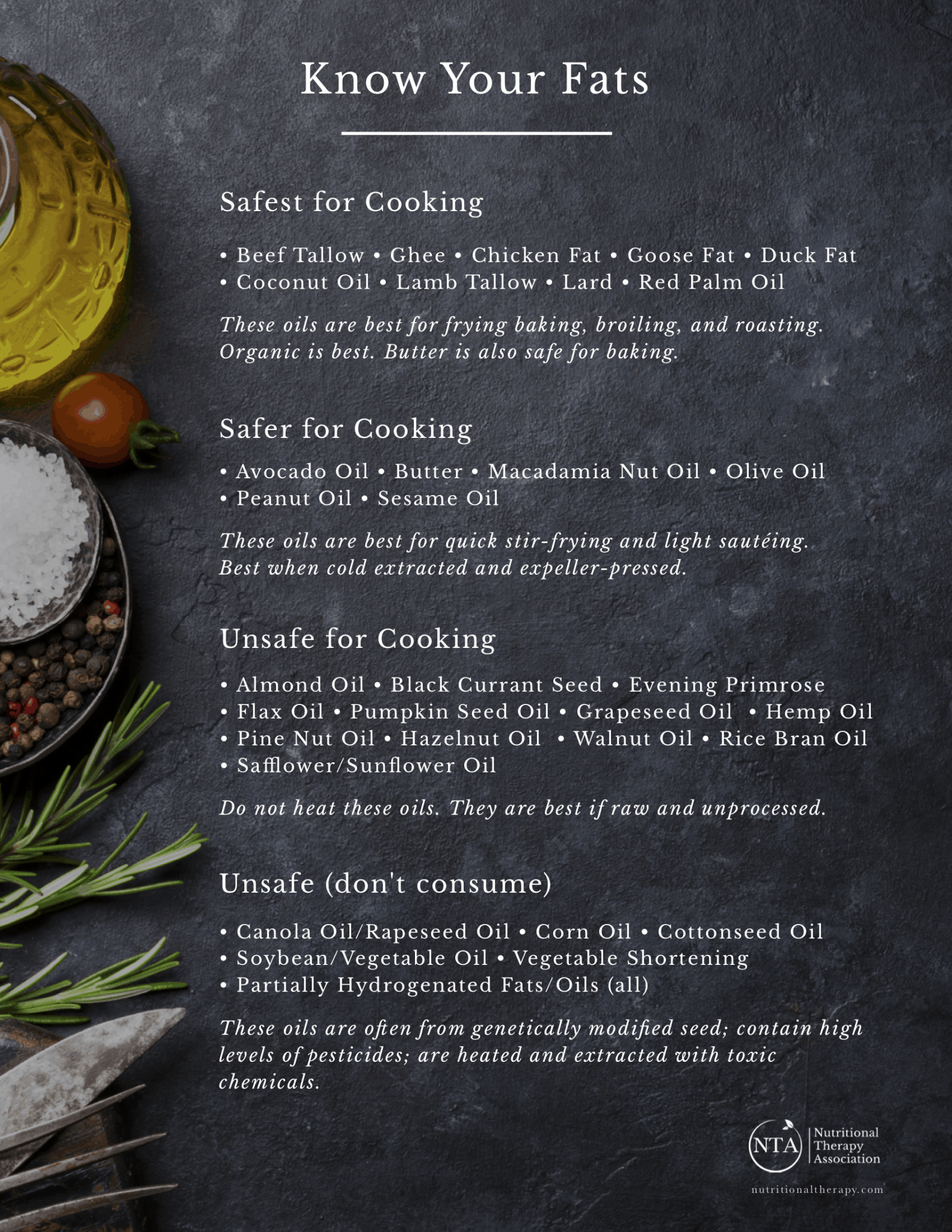 Join us for a Live Info Session. One of our Senior Lead Instructors will go in-depth, discussing the differences between our programs. This is a great opportunity for you to get your questions answered!

Register for the Next Live Info Session