Home » Nutrition Articles » The Power of an Ancestral Perspective on Diet

The Power of an Ancestral Perspective on Diet 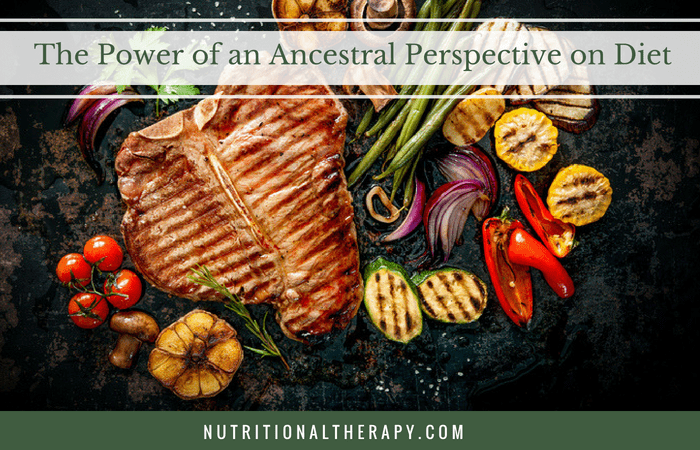 Guest post by Chris Kresser, M.S., L.Ac Learn more about Chris Kresser’s new ADAPT Health Coach Training Program. The evolutionary biologist Theodosius Dobzhansky said, “Nothing in biology makes sense, except in the light of evolution.” What did he mean by this? All organisms are adapted to survive and thrive in a particular environment, and when that environment changes faster than the organism can adapt, mismatch occurs. This is a fundamental principle in biology—and it applies as much to humans as it does to any other organism in nature. For 66,000 generations, humans ate primarily meat, fish, fruits and vegetables, nuts and seeds, and some starchy plants. We were physically active. We didn’t sit for long periods. We lived in sync with the natural rhythms of light and dark, in direct contact with nature, and in close-knit tribal social groups. Our ancestors, as well as contemporary hunter–gatherers that have been studied, were lean and fit and remarkably free of chronic inflammatory disease. They were also superior to us in the industrialized world in every measure of health and fitness—from body mass index to blood pressure to insulin sensitivity to oxygen consumption to vision to bone density.

BUT THEY ALL DIED WHEN THEY WERE 30.

You might be thinking, “Who cares?! Our ancestors might have been healthy when they were young, but they all died when they were 30, so what does it matter?” Well, it’s true that our ancestors had shorter lifespans, on average, than we have today, but these averages don’t consider challenges that are largely absent from modern life, like high rates of infant mortality, high rates of warfare, trauma, accidents, exposure to the elements, and a complete lack of any kind of modern medical care. When these factors are considered, it turns out that our ancestors lived lifespans that were roughly equivalent to our own. But the difference is that when they were able to escape the difficulties of early life in the Paleolithic, like the trauma and the warfare and the exposure to the elements, they reached the older ages that we reach without the inflammatory diseases that characterize our old age. They didn’t get obesity. They didn’t get heart disease. They didn’t get diabetes, gout, hypertension, or most cancers. Now, contrast this with today where: Just think about that last statistic for a second. That’s 17 percent of the population. More than 80 distinct autoimmune diseases have already been identified, and several new ones are being identified each year. So what happened? What transformed us from a healthy, vital people, free of chronic inflammatory disease, to a sick, fat, and unhealthy people?

Agriculture was the first blow. Hunter–gatherers were virtually guaranteed a healthy diet because of the diversity and nutrient density of the foods they ate. But once humans settled down and started farming, there was a major shift in our diet. Average carbohydrate intake shot up and protein intake plummeted. The quality of protein that we ate also decreased. Animal protein is significantly more bioavailable than any plant protein. Soybeans are pretty close to beef, but they contain phytic acid, which interferes with protein absorption. Our ancestors in the agricultural period also started to experience tooth decay, anemia due to iron deficiency, increases in infant mortality, and decreases in average bone density. We know from the archaeological record that all of these diseases were rarely experienced by our hunter–gatherer ancestors. The second major blow was the Industrial Revolution. There’s no doubt that agriculture led to a significant decline in our overall health, but the Industrial Revolution was really the knockout punch. It brought us to where we are today, when white sugar, flour, and vegetable oil make up over 50 percent of the calories that the average person living in the industrialized world consumes each day. We’re more sedentary than we’ve ever been before. We sit while we work, and we sit while we play. We’re chronically sleep deprived. A third of Americans now sleep fewer than six hours a night, which is up from just 2 percent of Americans in 1965. We’re working harder than ever. Finally, many of us live and work in isolating and alienating social environments, where we feel disconnected from the natural world that we evolved in. Now, it may seem like this has been going on for a while, but if human history were a football field, the period of time that we lived as hunter–gatherers would be 99 1/2 yards on that football field, and the period of time that we have been living with the advent of the Industrial Revolution is really just a few inches of that last half yard of the football field. So, when you look at the timescale of human evolution, the vast, vast majority of it was us living as hunter–gatherers. This profound mismatch between our genetic heritage and the environment we live in is responsible for the epidemic of modern disease, and it also explains why the Paleo diet and lifestyle has helped so many people. But despite the overall success of the Paleo movement, it’s not without its shortcomings, so I’m going to summarize them here. My book Unconventional Medicine addresses them in much more detail.

ONE SIZE DOES NOT FIT ALL.

Paleo is a fantastic starting place, but it’s not always a destination. While some people thrive on a strict Paleo approach, others don’t. There’s really no reason to avoid foods that modern research suggests are healthy when they’re well tolerated just because they weren’t part of our Paleolithic ancestors’ diet. It’s true that our genes are largely the same as they were during the Paleolithic Era, but that doesn’t mean that we haven’t developed some important adaptations to agriculture or that human evolution stopped completely 10,000 years ago. There’s really no one-size-fits-all approach. You hear diet gurus claiming that everyone should be on a low-carb diet or everyone should be on a low-fat diet, but if there’s one thing I’ve learned, it’s that the key to long-term success is personalization, or customizing the diet to meet your needs or your patient’s needs. We share a lot in common as humans, but we’re not robots. We have different genes, different gene expression, and different lifestyles, health issues, activity levels, and goals. All of these influence what an optimal approach might be for us, and since these factors change over time—for example, if you develop a chronic illness or move to a new climate or start training for a competition—your ideal diet should change over time. In fact, it should even change seasonally throughout the year. It certainly did for our Paleolithic ancestors. They didn’t have the ability to eat food that was shipped from 5,000 miles away from a completely different climate. They ate what was seasonally and locally available, and there very well may be something to that for us biologically. Here are some factors that will help determine how you customize your diet or your patient’s diet: The truth is there’s no single formula for everybody to follow to get the best result. It would sure be nice if there were, and it would make it a lot easier for everybody, including us as clinicians, but the reality is it doesn’t work that way. Personalization is the key to success.  Chris Kresser M.S., L.Ac., is the CEO of Kresser Institute and the co-director of the California Center for Functional Medicine. He’s also the creator of ChrisKresser.com and is the New York Times best-selling author of The Paleo Cure and Unconventional Medicine. Chris was named one of the 100 most influential people in health and fitness by Greatist.com, and his blog is one of the top-ranked natural health websites in the world.  Learn more about Chris Kresser’s new ADAPT Health Coach Training Program.

SEE CHRIS AT OUR ANNUAL CONFERENCE

Chris will be speaking at our 2019 Annual Conference: Roots. Hear him and a full panel of health and wellness experts. Register today!