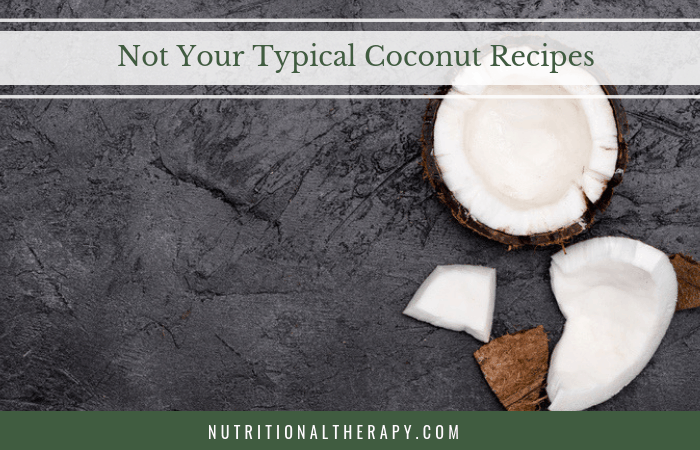 Not Your Typical Coconut Recipes

Not Your Typical Coconut Recipes

Guest post by Tracy Bosnian, NTP, CH, CFSP This article was originally published in the Nutritional Therapist, 2012. These days coconut is EVERYWHERE! Because I grew up in Hawai’i coconut was an everyday food. We didn’t think of it as a health food, but as a sweet treat. I’m going to date myself here, but growing up when I did we didn’t have soda pop. Or at least I should say it was not the common sweet drink. There were a ton of juices, but fresh coconut water straight from the tree was not uncommon. I think in our community if you haven’t experience coconut; you have been hiding under a rock. I hope these recipes will inspire you to try new ways to enjoy this lovely nut. Most people know how amazing coconut oil is, but the meat and the water of the coconut is also therapeutic.  The water of young coconuts has been used for emergency plasma transfusions during past wars. It is very easy to find coconut water everywhere these days, but be aware that the stuff in the bottle or can is nowhere near the quality of that coming out of the young coconut itself. The processing of the coconut water makes the water devoid of most of its important actions.  It no longer has the enzymes that make it so wonderful when getting it from the young coconut itself. Coconut water is excellent for dehydration. Athletes use it to help replenish electrolytes. In Brazil, the husk of the coconut was made into a tea and used for inflammation. Coconut meat is a great source of dietary fiber and is great for people on low carb diets. The meat of the coconut is also used to treat diarrhea, making eating coconut macaroons a good thing! If you want to use the water as a healing agent, make sure to use a fresh young coconut. Research has shown that coconut oil can kill microorganisms that cause sinus infections, pneumonia, bladder infections, ringworm, candidiasis, influenza, measles, and mononucleosis. Because of its germ-fighting properties, coconut oil is often added to infant formulas.  Sally Fallon and Mary Enig’s book Eat Fat, Lose Fat: The Healthy Alternative to Trans Fats, tells us that consuming coconut oil can help us lose excess body fat, increase energy, and improve thyroid function. If you are just starting to add coconut oil into your diet, you might want to add it in gradually; it can cause loose stools if you are not used to it. The recommended daily amount of coconut oil is 3-4 tablespoons per day. Start with one tablespoon per day. After two weeks increase it to two tablespoons. Stay on two tablespoons for two more weeks, then add in another tablespoon, and so on. Bruce Fife, ND is another great supporter of coconut and written at least five books on coconut. Here are some new and creative ways to use coconut milk, coconut oil, and shredded coconut in your pantry!

I grew up eating this pudding. It is the Hawaiian equivalent of Jell-O pudding. This recipe was originally made with white sugar. I use a very mild tasting honey and not very much of it as I think the coconut milk is sweet all on its own. Ingredients: 2 cups coconut milk 1 cup whole milk (or water, or more coconut milk) 2 tablespoons honey A pinch of salt 5 tablespoons arrowroot or tapioca starch 1/4 teaspoon vanilla (optional) Preparation: The recipe can be easily modified for personal taste using more or less sweetener and cornstarch.

I wish I could remember who shared this recipe with me. It is a super easy go-to for dinner parties and I have been using it for years. If there is not some yummy seasonal fresh fruit, thawed frozen fruit works great. Ingredients: 4 cups coconut milk, divided (I prefer Native Forest or Natural Value) 2 ¾ teaspoons unflavored gelatin ¼ cup maple syrup 2 teaspoons vanilla extract 1 cup seasonal berries Preparation: Kulolo (taro & coconut “pudding”) I love this, it takes me home every time I make it. GeniusKitchen.com Ingredients: 3 cups taro root, peeled and grated 1 cup fresh coconut grated 1 cup coconut water (the liquid inside a coconut) 1 cup coconut milk ½ cup organic brown sugar (I adjusted this from ¾ cup) coconut oil to grease loaf pan Preparation:   Reference: – My own kitchen and experience – Bruce Fife: The Coconut Miracle – Mary Enig & Sally Fallon: Eat Fat, Lose Fat: The Healthy Alternative to Trans Fats – NPR online article: https://www.npr.org/sections/health-shots/2011/08/15/139638930/saved-by-the-coconut-water-parsing-coconut-waters-medical-claims This article originally appeared in the Winter 2012 (updated 10/18) edition of The Nutritional Therapist. Tracy graduated as a Nutritional Therapy Practitioner in 2005, has sat as a member of the Nutritional Therapy Association’s Board of Directors, and has assisted with the NTP program in Portland, OR.