How to Discuss Scientific Ideas 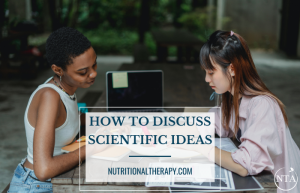 In the final installment of our research series, we will explore an overlooked aspect of understanding, accessing, and discussing research–how to navigate disagreements. We have all witnessed or maybe even been part of a professional disagreement. These are common–maybe even inevitable–but that doesn’t make them easy!  Social media is replete with examples of disagreements gone awry.

We propose an alternative: disagreement based on curiosity and cooperation. What if we asked “What can I learn here?”, instead of “What can I teach here?”, when having a disagreement? How can we accomplish this feat in the heat of the moment? 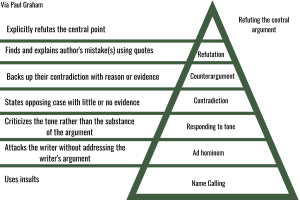 There are no black and white answers to these questions, but they’re useful to explore so that we can step back, gain perspective, and engage in disagreement in a productive, rather than argumentative, way. Paul Graham, a computer programmer, painter, writer, and co-founder of Y Combinator proposed a ‘hierarchy of disagreement’ in an essay called How To Disagree (link: ). He asks, “What does it mean to disagree well?’” while exploring disagreement strategies from name-calling–the lowest rung in the disagreement hierarchy–to a refutation of the central point of what one disagrees with, the top of the pyramid.

If you’d like to read more about the hierarchy of disagreement strategies, read this great article on Big Think!

None of these concepts necessarily come easily. Using them may take work and practice, but–ultimately–the more we can identify bias and approach disagreements respectfully and with the intention of cooperation, the better world we will build. Through this research series has been technical at times, its message supports the underlying mission of NTA professionals to meet people where they are, respect their autonomy, and do the most good with the least harm.

Meredith Kinsel-Ziter, NTP, BCHN, is one of the Nutritional Therapy Association’s Lead Instructors and Curriculum Contributor.